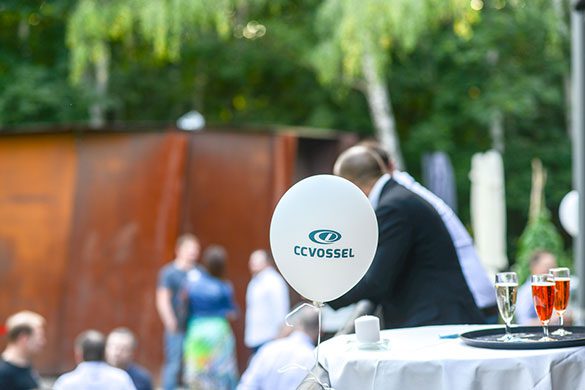 The name CCVOSSEL has stood for IT services of proven quality since 1996. With our experienced Berlin team and our high standards, we look after numerous customers from a wide variety of industries. Our offer ranges from software development and IT consulting to support and individual all-round solutions.

Our own development process

We started small – as a sole proprietorship with a small team and small orders. But these soon expanded to include more extensive projects. In close cooperation with our customers, projects turned into IT products and products into new possibilities. We have grown from this as a team and as a company: at the beginning of 2013 we changed our name to CCVOSSEL GmbH. And we look forward to how it continues!

Customer orientation is our trademark. At CCVOSSEL GmbH, cooperation based on partnership is the focus. As complex as IT services are, we make them understandable and in close cooperation with our customers.

In German instead of technical jargon, with knowledge transfer instead of secrecy, because satisfaction can hardly be achieved without mutual understanding.

Family friendliness is very important to us. We are a young and innovative team. Fairness, comradely togetherness and interaction on equal terms characterize the corporate culture. We also see the compatibility of family and work as a matter of course.

Flexible working time models, individually negotiable working hours and equal career and development opportunities for employees with and without family responsibilities are not foreign words for us, but everyday life.

Would you like to find out more about us?

Awards
From ISO 9001 to software made in Germany – we have our quality checked and confirmed by third parties.

News
Whenever there is something new with us, it is here first.

Jobs
Perhaps you are the ideal addition to our team. We would be glad.

Our mission statement:
We want CCVOSSEL to be a fair, successful company.

A company whose team is characterized by different personalities and a real togetherness. In which the chief Executive Officer tolerates both praise and criticism and can and should be approached for both at any time. In which it is clear that everyone has their job and their areas of responsibility and that their work is valued.

A company that the Customers trust and with whom they enjoy working. She too tasks that are not run-of-the-mill, but where we can develop something new ourselves. Because we are a great team, because we don’t talk to them and, of course, because they know how good we are professionally.

A company in which we also find the best solutions for ourselves. For example, how young fathers spend more time with theirs family can spend. How we are the most intelligent Environment relieve. How we resolve conflicts that occur even in the best teams. How CCVOSSEL can grow but retain its special features.

A company made up of competitors partner and thereby win customers instead of fighting for them. That a broad one network connects because they want to exchange ideas – with other companies, politicians, artists, scientists, environmentalists, start-ups, … And that distinguishes itself through the fact that it exists as it is.

Lived convictions start with the management,
not with the employees

Every entrepreneur probably wants to have a good working relationship with his team and a partnership with his customers. We know from experience – and especially Carsten Christian Vossel: Only if this wish is the basis of all action can it come true. Because its realization requires honest willingness to talk, openness to questions and criticism, the ability to learn new things as a managing director and the will to really involve all those involved. Not just once, but permanently. But it works.

“CCVOSSEL is proof that a commercial enterprise also – and especially! – can be successful with fair cooperation, honest respect and well-deserved trust. “